Three days in an enchanted land

To say I was surprised by Santa Fe would indicate that I had some sort of expectation for the place. Which, call me ignorant, I did not. This isn’t to say I thought there’d be anything wrong with it–I had a sense of the town as an historic, artistic hub and a good place to live for the generally creative and outdoor minded–I just knew next-to-nothing about the mountain biking.

In this line of work, showing up to a lesser-known destination usually goes one of two ways–option one is that there’s a few decent trails to ride, on which we shoot the coolest sections during the best light, pen a few nice sentences about it all and then carry on. Option two is the one where you feel like you’ve been let in on a special secret. These are the places that I think about long after I’ve moved on. At risk of blowing out that secret to the world, Santa Fe is one of those special places.

I love the Whistlers and the Moabs as much as the next guy, but I tend to connect most with this kind of spot, where the stoke is a surprise rather than a confirmation. There’s something about riding somewhere totally unknown that feels like quintessential and pure mountain biking; where the joy of dropping in feels like an unfiltered childlike rush of discovery that you just can’t get on trails that are splashed all across the internet. That’s what it felt like in Santa Fe, where every time we pulled bikes off the truck we rolled into something new, different from anything else we’d ridden, and downright fun. 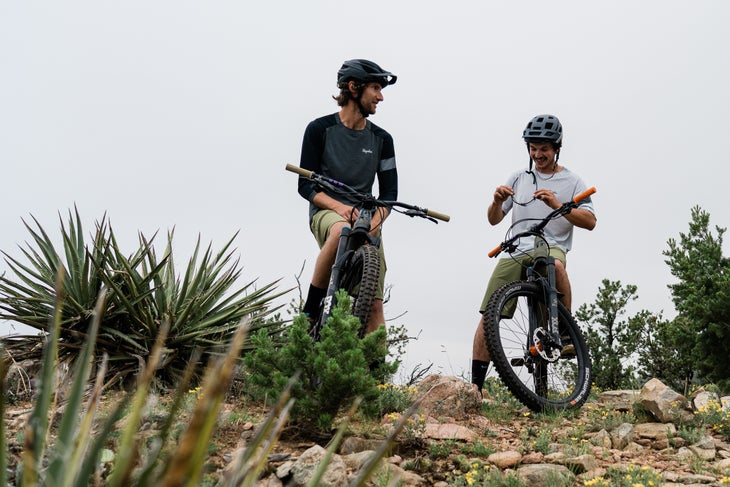 Of course, it’s often the people who you connect with somewhere that make things really click, and it was no different in Santa Fe. There’s a passionate, humble, diverse and tight-knit riding community; guys and gals that have been quietly giving their all to the local riding spots for decades. Working tirelessly and unselfishly, they’ve built a riding culture both imbued with respect for where they ride and the work that allows it, and focused on making mountain biking more accessible to anyone curious about two wheels.

They are soul riders in Santa Fe, and they know how to have a good time. Enter Henry Lanman and Teddy Jaramillo; our main characters and a dynamic duo of earth-moving prowess and style on wheels, Santa Fe born-and-bred and a downright riot to be around. Henry and Ted describe themselves as trailbuilders first, and indeed they exude dedication to all of the bike-related infrastructure around Santa Fe, including their work with local nonprofit IRideNM. Yet as much as anything else, they’re simply a joy to spend time with, and it’s hard to avoid letting their energy and love for their hometown become infectious.

Henry and Ted towed myself and photographer Evan Green through a little bit of everything during our three days in town. I’ll keep it brief and let the pictures do their thousand-word thing, but it was everything from desert jump lines to aspen-packed singletrack, with an unlimited supply of chiles and damp dirt thrown in. Give the motto writers their due, and consider me enchanted.

72 Hours is supported by Rapha, Schwalbe and Yakima.

Check out more 72 Hours HERE – and get inspired for your own adventure this weekend.