Walk into any bike shop in Orange County, California, and you’re likely to see a classic GT mountain bike or two. Some are still being ridden as mountain bikes like the I-Drive we talked about last time. Others may only end up as a campus cruiser for the lucky kid of a former mountain biker. That’s likely where this 25-year-old LTS is going. The LTS was the successor to GT’s first full-suspension bike, the RTS, and marked a time in suspension design when we actually wanted our suspension to remain active as we were pedaling. While the RTS would lock itself out under pedaling load, the LTS was designed to keep providing traction both on or off the gas. Just a few years earlier, also-Orange-County-based Amp Research had cracked the code with the Horst Link, which was purchased by Specialized and licensed out to brands who wanted to use it. Brands like GT. 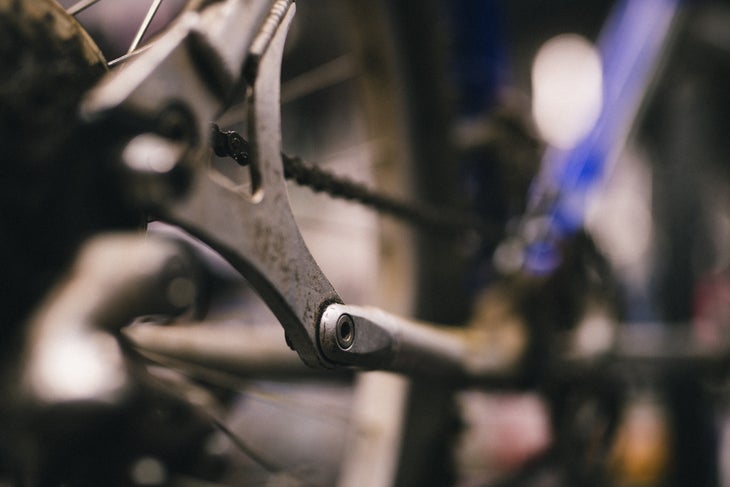 The LTS had limitations in travel and, without a problematic redesign, forced high standovers, but it was a step in the right direction for the booming brand. Some higher-end models had crazy features like forged titanium rocker links or a trunnion-mount rear shock that could be threaded up or down to adjust the frame geometry in the same way that today’s flip chips would do.

But this bike is not one of them. The LTS-3 was the very entry level in the LTS lineup, and actually had about as simple of a rear shock as you could imagine. An elastomer stack was wedged into the space that, on higher-end LTS models, was designed to actually bolt to an actual shock.

Up front was the RockShox Quad 10 fork, also elastomer-sprung. Elastomer shocks had the advantage of providing some natural damping without the need for any hydraulic devices to calm them down. They were also light and cheap, but there were few tuning options, they stiffened up in the cold, and they kinda had a life span. Depending on conditions, they would break down. Sometimes they would start to ooze an odd viscus fluid, sometimes they would turn into blue cheese.

Somehow, the rear spring on this LTS is holding together, but inside its Quad fork, things were not well. The elastomers were hard as a rock and the fork was stuck just above bottom-out. So, we took this opportunity to teach you to know when to say when, and in this case, when was probably at least 10 years ago.

Higher Education: How to Get Your Bike Ready for Riding Season

I Stitched a Gash in My Tire – Trailside Bike Repair