POC and Mips. I feel like everyone has a couple like this in their life. You know the type. They had a big falling out, didn’t talk for years, and then suddenly, they show up together at a New Year’s Eve party and it’s like, “Yeah, we’re gonna give it another shot!”

It makes sense. They’re both from Sweden, they’re both acronyms, and they both love to play it safe. Mips, of course, pioneered the slip-plane approach to protecting the brain from injuries in oblique (angular) impacts. POC, of course, makes a suite of helmets that, each in its own way, put protection at the top of their list of features.

For about three years, POC’s approach to angular impacts has been another acronym; SPIN, or, Shearing Pads INside. A bit of a stretch, but it works. This system (still in use on some of Poc’s other helmets, including the Tectal) uses pads made of a silicone material that is capable of a limited “shearing” or sliding motion. It allowed for similar action to Mips without needing any structural components that might rest against the head, add weight or block ventilation. It was a welcomed feature. By the time SPIN was introduced, Mips had been adopted by every major helmet manufacturer and at nearly every price point. Its following had grown in numbers, but so had its haters. Leatt, Kali and, later, Bontrager would develop an angular impact protection system that didn’t require a Mips liner.

The very first helmet to hit the market with Mips Integra is the helmet POC is launching today, the Kortal Mips. Or, to serve all the aforementioned haters, there is also a Kortal without Mips. I want to stop here and give POC credit for that. It’s hard to find a good helmet without Mips these days, and offering a non-Mips Kortal shows POC trusts us to make our own decisions. Plus, it’s $50 cheaper.

Mips Integra is subtle. Especially on the Kortal, where instead of the trademark bright yellow, the in-molded slippery surface is transparent. It makes it nearly impossible to tell a difference between Mips Integra’s active ingredient and the rest of the exposed EPS inside the helmet. Where the Kortal’s 360-degree occipital retention system passes the forehead, its inner surface is polished smooth, but other than that, this looked to me like a normal helmet. I had my doubts. 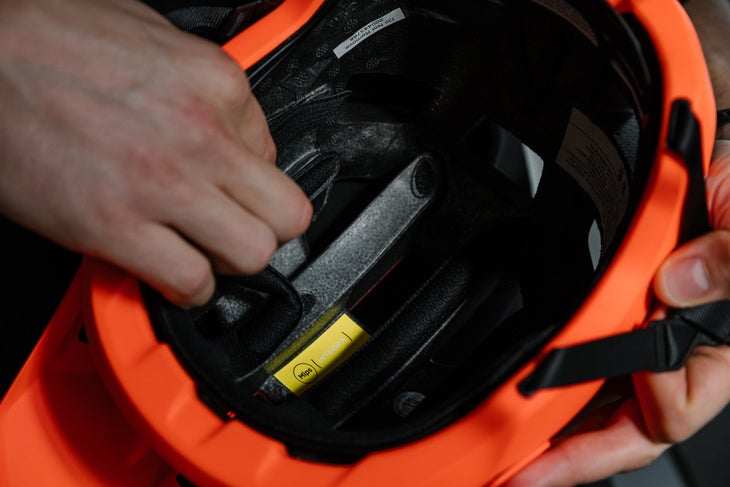 Most traditional Mips systems do not bother me. Especially what they’re now calling “Mips Evolve,” where the slip plane is integrated into the helmet’s occipital retention system. My personal helmet uses this system, and I have faith that it offers a benefit. But faith is what it takes. Thankfully, nobody is doing helmet testing with living humans. The science behind Mips is pretty astounding, but it’s not perfect.  For years, that science has told us that angular impact protection comes exclusively in the form of a plastic structure that slides inside of our helmet. Now, suddenly, all you need is for your pads to slide? Still. Doubts.

There’s no way to make an apples-to-apples comparison on Mips Integra versus Mips Evolve or “Mips Essential,” the original system. It’s impossible to make one truly identical helmet with all three systems and compare results. But Mips claims the Integra system does not, in itself, offer significantly less protection than its other systems. If that seems hard to believe, think of Mips Integra as the Mips we know, just upside-down. You can barely see it, but every traditional Mips liner slides on bits of slippery fabric adhered to the surface of the helmet. Fabric just like what’s on the outside of a Mips Integra pad. Essentially. the same thing is happening in both systems

Unless you count the points where the pads are Velcroed to the helmet. The Velcro patches are recessed in the helmet’s EPS, so some of the load should be transferred to the slip plane around it. But on the small pad sections that flank the two major centermost pads, there is no noticeable sliding thanks to the two, close-together Velcro panels. Mips assured me that this does not compromise the Kortal’s ability to deflect angular impacts. Because testing.

As with any Mips technology, the system is tested both hot and cold, wet and dry. Knowing how easily pads soak up sweat, I assumed that might increase the friction. After all, it’s easier to slide across a hardwood floor singing Bob Seger when wearing dry socks than wet socks. But Mips Integra works regardless. It should be said that the pads in the Kortal Mips use a similar silicone material as Poc’s SPIN helmets, but the lateral motion is handled by the Mips system. The non-Mips Kortal has traditional foam pads.

So, if you’ve made it this far, you probably want to know about the helmet itself, huh? I guess there is more to talk about. The overall fit of the Kortal is no different than most other POC mountain helmets, if you’ve ever worn one. It’s relatively deep and not too far on either the egg or orange end of the spectrum, shape-wise. It has the visual and tactile impact of a true all-mountain helmet. It’s not especially light at 390 grams for a size medium. That’s a bit chunkier than the 350 grams of a medium Troy Lee A2 or the 346 grams of the Giro Manifest, but in the ballpark of the 380-gram Smith Forefront 2 or 410-gram Bell Sixer. It is not meant to be a minimalist trail helmet. In fact, it passes the Dutch NTA8776 standard, which covers impacts at “higher speed than standard bicycle use.” It speaks well for the Kortal’s focus on survivability, though there’s no specific claimed feature meant for protection against low-speed impacts.

Like the Tectal Race, the Kortal Mips includes a Recco location transmitter that does not require any activation or charging, though its use is primarily in bike parks and particularly high-mountain-bike-traffic areas. There’s also an NFC medical information chip that allows you to store any important medical information on a chip in the helmet.

The straps are managed like the rest of the POC lineup. Anchored cleanly into the rim, and joined below the ear with a wide-stance flat plastic plate that makes adjustment a bit of a pain, but will only need to do so once. A Fidlock buckle would have been nice at this price, but maybe that’s just because I’ve gotten used to them. The height-adjustable retention system has a finely adjustable dial and it’s always nice to see it reach 360 degrees, from the harness to the forehead and back.

The three-position visor actually has three usable positions. The low position crowded me a tiny bit, but I could imagine using it on a drizzly day. The middle position looks normal, and it wasn’t even in my field of view. Which leaves the high position pretty much for goggles only, but it worked just fine for that. There’s no rubber traction or clip at the rear of the helmet for goggles, but I had no issues keeping them in place on the one goggle-equipped ride I did in order to write those two sentences. Another feature of the visor is the breakaway hinges and positioning mechanism. In a face-first impact where a traditional visor may stay intact, dangerously bending the rider’s neck back, the Kortal visor is designed instead to break away.

In the place of threaded bolts like on the Tectal, the visor hinges on two small plastic pins molded into the visor itself. The hinges will snap off and the indexing mechanism will allow it to exit just past its uppermost setting. Unfortunately, the breakaway feature is a bit too eager to break away. After plowing through an overgrown section of trail, I had one side pop out of its insert. After popping it back in, which was simple enough, the other side popped out in a similar situation a couple hours later. But this time, a small plastic tooth on the visor’s pivot point broke off. It clearly should not have happened in my case, but from POC’s perspective, who’s to know? This could easily happen from careless stowing in a backpack, or when crashing into something more substantial than a low branch. POC expressed some surprise at how easily the visor broke, but they assured me that a consumer in my situation would be taken care of. Or, if a visor broke from abuse or a minor crash, POC’s visors go for about $30.

POC boasts what they call an “eye garage” at the back of the Kortal. Sure, I was able to get a pair of glasses to hold in there with relative stability, but I could always feel the arms against the back of my head. They were secure and easy to get in and out, but it didn’t feel like a purpose-built eyeglass caddy. Oh, and speaking of eyeglasses, POC just released the Devour glasses, meant to pair with the Kortal. Read our first impressions here.

So, finally, we’re at the ride impressions. I’m happy to report that the Kortal does not feel like a Mips helmet. Yes, if I’m in a quiet room and I jiggle my head really hard, I can hear the faint “sh-sh-sh-sh” of the pads gliding along the slip plane. But not when I’m on the trail. If it’s happening at all, I can’t hear it over the sound of my tires. And I definitely can’t feel it. There’s no wind-up and bottom-out as it orbits around my head. If you’re like me, and you’re fine putting up with Mips, the Kortal is a gentle hint that things used to be a little better. If you’re sensitive to the Mips Jiggle, it is just about eliminated here.

It’s also a little above average in price. $250 is somewhere near the outside edge of high-end helmets. The Smith Forefront 2 is $240, and the Giro Manifest is $260. But the list of features in the Kortal is overwhelming. Emergency location assistance, medical information storage, Aramid fiber reinforcement, multi-position breakaway visor, silicone pads and, at the top of that list is something that may come to replace Mips as we know it.