So, this thing’s full name is “Elliptical Direct Mount Chainring for Cane Creek and SRAM Cranks for Shimano 12spd Hyperglide+ Chain,” but I don’t think Beta’s SEO consultant would ever forgive me if I gave this post such a long title. I mean, it’s great that it fits Cane Creek cranks. I’ve got one of those. I like that it fits Shimano 12spd Hypergrlide+ chains. I’ve got one of those too. But it’s the way Wolf Tooth handles the “elliptical” part that really stands out for me.

The whole elliptical chainring concept is not for everyone. I’ve found that the higher the RPM, the more awkward it feels. I’m not saying that elliptical chainrings will never work for spinners, but it takes a more polished pedal stroke to keep it smooth.  The constant rise and fall of resistance is almost too much to keep up with. It can sometimes pull you into this feedback loop, where you unconsciously push harder as your pedal stroke crests and you reach the shorter-radius segment of the chainring. That harder push means you speed up more, and eventually you’re reaching dead spots in your torque every stroke until you have to shift up, which may mean you’re no longer spinning. 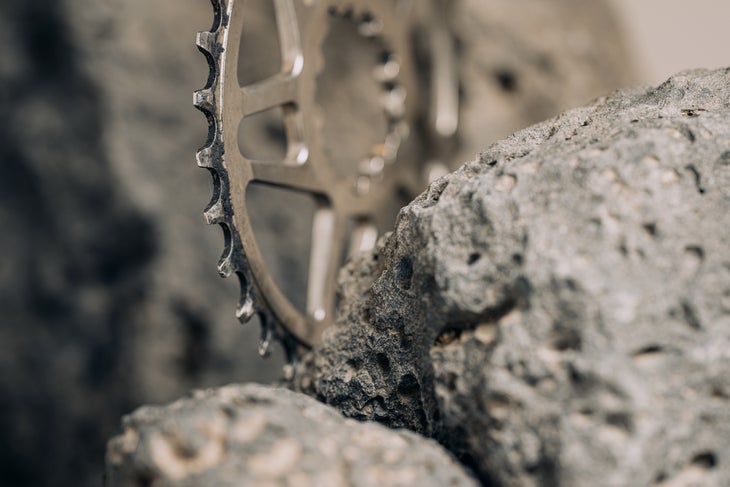 On the other hand, high torque, moderate-speed pedaling makes immediate sense on an elliptical chainring. You get the most forward movement when you’re producing the most watts, and you’re helped by the greatest mechanical advantage when you’re simply winding up for the next pedal stroke. The problem is, most of our rides combine some low-speed pedaling and some high-speed. It’s why I know a lot of people who have tried the elliptical chainring idea until the novelty wore off, and they got real and went round again.

But not all elliptical rings are created equal. My first experience with the concept was on an Absolute Black ring. If you really want the full oval experience, Absolute Black goes all-in. Steep, technical, widowmaker climbs are suddenly a little easier and a little smoother. Surprisingly, it makes torque and traction more consistent, not less. But once I got up to a moderate climbing speed, it became too much. I could feel the peaks and valleys in the resistance under my feet. The novelty wore off, and I went round again. But then, the Wolf Tooth Elliptical Direct Mount Chainring for Cane Creek and SRAM Cranks for Shimano 12spd Hyperglide+ Chain fell into my lap, and I found it was slightly less extreme than the Absolute Black ring. It wasn’t the ultimate experience of high-torque monster-trucking, but it also didn’t misbehave when I was frantically mashing to keep speed through a flat section of a descent. And it felt  not just normal, but optimal on steady climbs. It’s the perfect oval ring for anyone oval curious.

And on top of that, there are versions to work with SRAM Eagle, Shimano Hyperglide+, or traditional 9, 10 or 11-speed chainrings, and each configuration has a direct-mount version for SRAM, Shimano or Race Face cranks, as well as whatever 4-bolt configurations are still in common circulation (HA!). There are a lot of niche use cases in Wolf Tooth’s extensive chainring catalog, but nice use cases is what Wolf Tooth does. It’s a benefit of all their chainrings being made in the USA. Wolf Tooth can make things in small batches, even if they have to have long names.