What do you get when you add a little extra Adidas to your Five Tens? You get the Trailcross lineup, a range of shoes that falls somewhere between a trail runner and a dedicated riding shoe. But that’s exactly the point of the Trailcross—it’s meant to be a shoe that caters specifically to backpackers, bikepackers and adventure riders who find themselves pushing their steeds up gnar as much as riding down it. It’s hard to argue that such a shoe niche doesn’t already exist, see also Giro’s ever-popular Terraduro lineup. Or more recently, the Specialized Rime Flat. But at the same time, it raises the question; Do we really need a hybrid shoe like the Trailcross?

The problem with hybrids is that they generally aren’t good at either thing they’re trying to blend together. Take hybrid city bikes, for example, they aren’t very fast when compared to a road bike, but they shrink away from anything more gnarly than a gravel driveway. Or how about adventure dual-sport motorcycles, which again, aren’t ideal if used as dedicated road machines, but also won’t go braap quite like an enduro bike (the kind with a motor). We can’t forget the spork either, which needs no explanation other than its name.

The thing is, hybrid bikes sell like hotcakes, adventure dual-sport motorcycles are taking that industry by storm. And sporks, well, I’m sure they have a dedicated fanbase as well. Despite hybrid options being jacks-of-all-trades, masters-of-none, for their intended customer and use, they generally work quite well. So, is the Trailcross a concept that actually works for its intended purpose, or is it just all Kool-Aid?

Now, with all of my musings about the broader implications of the Trailcross lineup out of the way, let’s actually talk about the shoes. That is the point of a gear review, is it not?

The Trailcross comes in three tasty flavors. Well, technically four but the new Trailcross GTX is an extreme-weather outlier that, for all we know, may not exist yet. There’s the Trailcross LT, Trailcross XT and Trailcross Mid Pro. The LT model is the low-top option, looking rather like a regular running shoe. The XT has an additional neoprene ankle gaiter and gusseted tongue. Finally, the Mid Pro extends the ankle gaiter and adds two D3O pads over the ankle bones. The rest of the shoe remains effectively unchanged between models. 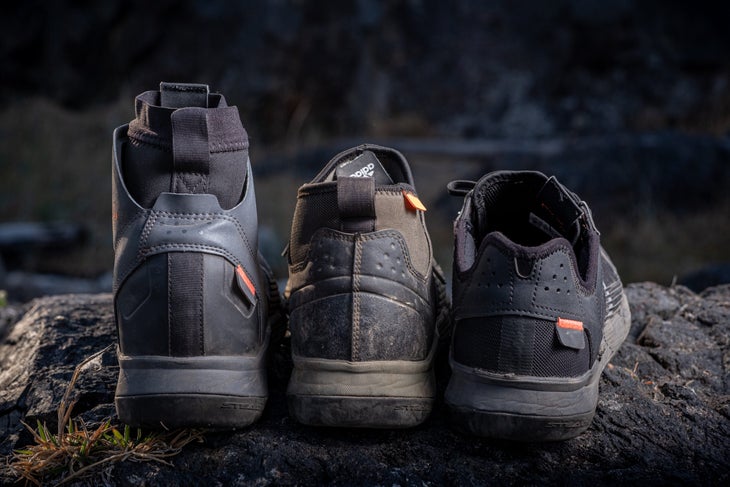 The heart of the Trailcross is, of course, Five Ten’s Stealth rubber. These shoes use the Phantom variant of the stickiest rubber in the MTB world, which, no surprise, is exceptionally sticky—we’ll get into that more later. The midsole of the Trailcross is a fairly standard EVA, with the uppers being a mix of (all synthetic) mesh and closed panels. Those uppers are very light when compared to other Five Ten, or really any other riding shoe, especially over the toe and sides of the foot. Those areas are entirely mesh to help with breathability. The ankle, somewhat similar to a Freerider Pro, is stiffly and tightly padded for a secure fit. All the Trailcross models use laces and, here’s the cool part, have drainage channels near the midsole to help water … well … drain.

The Trailcross LT will run you $140, the Trailcross XT $165 and the Trailcross Mid Pro comes in at $170. Since the Trailcrosses share the same base, so to speak, I’m going to (mostly) lump them together when it comes to the ride report. There are differences in practicality and usage, though, so I will cover those as they arise.

Before all that, a note on sizing between the models; the Trailcross XT ran true to typical Five Ten sizing, however, the Trailcross LT came in about half a size smaller and the Mid Pro a half-size larger.

The first thing I noticed when donning the Trailcross was the lightweight feel. Seriously, these things feel unlike any riding shoes I’ve even worn. They are exceptionally breathable over the toes and sides of the foot, and it actually took some getting used to while riding as I’m used to wind blowing in my hair, not toes. In hot weather, the Trailcross is hard to beat, but on the flip-side, I can’t recommend these in weather below 40 degrees Fahrenheit as they let those little piggies freeze solid.

That being said, if you ride in wet conditions frequently, the Trailcross is definitely the fastest draining and drying shoe Five Ten makes. I haven’t tried every flat shoe out there, otherwise, I’d extend that statement even further. The drain holes actually work as intended when the shoe is fully saturated, and there’s so little foam and padding that nothing really holds water for long. In light of this, on wet rides in the winter, I’ve actually just donned a set of waterproof socks and rode in a pair of Trailcrosses as I know the shoe might actually dry in time for a ride the next day (which may or may not also be wet). The shoes are still cold in the winter, but not having to constantly run a boot dryer is sometimes a worthwhile trade-off, especially if you have waterproof socks. If you’re lucky to ride somewhere that’s wet and warm, well, these shoes could be your cup of tea.

Another benefit of the lightweight construction of the Trailcross is felt when performing the hike-a-bikes. While I’ve hiked in Five Ten’s iconic Impacts and Freerider Pros for the past decade and have no issue with doing so, I must say hiking in the Trailcross is like riding a 28-pound trail bike after slogging around a 35-pound enduro rig all season.

When hiking, especially in loose terrain, crud is likely to fall into shoes. The Trailcross LT, the lightest version and easiest to hike in, is a low top and fills pretty easily with said crud. In light of that, I found the LT is best for hot-weather bikepacking where most of your walking is probably around camp, grocery stores or the like instead of multi-hour hike slogs. If your rides do involve said slogs, you’re better off with the Trailcross XT or Mid Pro, both of which have gaiters. The gaiter on the XT works part of the time, meaning that it’s better than not having it, but it’s too loose at the top to actually seal the shoe off. Plenty of crud still gets in. The Mid Pro does effectively seal off the shoe so if you’re getting in deep, that’s the model to go for.

However, all the Trailcross models let in fine sand like a sieve. The mesh panels are sparse enough that sand and dust just fall inside and before long, the shoes are filled. Keep that in mind for your intended terrain.

Also on a hiking—and riding—note, the Trailcross shoes are fairly flexible, perhaps between a regular Freerider and a Freerider Pro. They do have slightly better hiking traction than standard Five Ten flats, especially in damp terrain. However, they get overwhelmed in deeper mud and as such do better in dry conditions. When walking, the shoes feel slightly stiffer than a running shoe, but not nearly on the level of even moderate trekking boots.  The Trailcross leans more towards a light and fast approach than an all-day, mega-gains mentality. Personally, I prefer a stiffer platform when pushing uphill through rocks as it’s less fatiguing on my feet, especially when I’m carrying a bike on my back. On rough, long descents, my feet definitely start to feel some fatigue, fatigue I never feel riding shoes with stiffer soles.

This brings us to my biggest quip with the Trailcrosses. While their lightweight construction is great for comfort and speed, it leaves much to be desired when it comes to protection. I’ll put it this way; I would be very hesitant to ride any Trailcross shoe in a bike park or on trails with loose rock that gets tossed up from the front wheel. The toe box offers about the same level of protection as the regular Freerider, and there is absolutely nothing on the sides of the shoe past the pinky toe; it’s pretty much just a running shoe in that sense.

This is a point where the models differentiate themselves again. The LT model offers little in the way of protection. The XT offers slightly more ankle protection from the gaiter, but it’s more for abrasion than anything else. The Mid Pro has D3O ankle protection, which does offer some impact protection, but it’s kind of a moot point because the rest of the shoe remains vulnerable. I’d rather just have the tall gaiter to seal off the shoe from crud—most of my foot strikes are on the outside edge of the toe, which is entirely unpadded or protected on all the models.

The Trailcross lineup aren’t designed to be dedicated, hard-charging riding shoes. They are lightweight and fast, but they’re not shoes I’d use for everyday trail riding. Where I see the Trailcross excelling is in its specific niche—adventure riding.

What exactly is adventure riding? Well, I think it’s somewhere between (and including) bike packing and the All-Day Epic. It’s probably not a ride to make it on the Strava leaderboard, but your GPS trace might turn some heads for its unconventional interpretation of geography and topography. There might be as much hike-a-bike as ride-a-bike, and you may or not be wearing Spandex. A water filter is probably mandated equipment and your ride time is measured by the thickness of the salt stains on your jersey as much as it is by your Garmin.

In short, the Trailcross line isn’t ideal for the riding that “mountain bikers” engage in most of the time. It’s meant for the fringes of the sport and the map; the rides and riders that bugger off and do their own thing instead of simply following the heat maps. It might not be the best everyday riding shoe. But that’s OK, it’s not meant to be.