Unlock this article and unwrap savings this holiday season.

You can often tell what day of the week it is by the scratches on my forearms. They’ve usually faded into a few dots and dashes by Friday, but on Monday morning, they could pass for a late-’40s Jackson Pollock. The trails I ride during most weekends are raw and remote. And even though I’ve been doing my part, a COVID-related pause in officially organized trailwork has left us playing a long game of catch-up. But somehow, I had never considered doing much about my modern-art sleeve tattoos besides wearing gloves and long sleeves until the VC Hand Guards fell into my lap.

I’m rarely this conflicted about testing a product. No matter how practical they may be, mountain-bike hand guards kinda remind me of the short-lived (but frankly quite well-executed) line of Roadmaster department-store kids’ bikes called Motocykes. Put a plastics kit onto a bicycle, and it’ll fulfill the average kid’s fantasy that they are actually riding a motorcycle, not a boring old bicycle. Although they didn’t have hand guards, a Motocyke is exactly what I saw when I looked at every bike I rode while testing the VC Hand Guards. The thought: “What have I done?” ran through my mind. But I had a job to do.

There are a number of hand guards on the market right now. We’re starting with the VC Guards because, structurally, they’re extremely well executed. The mounting brackets have a fit and finish that reflect careful attention to design and aesthetics. The edges are beveled, the hinge is clean and flush, and the pinch bolt threads in from the top, so it’s never obstructed by a brake or shifter. The actual hardware looks like a product that’s got two or three generations under its belt, and the same is true for how it integrates with your handlebar.  Those brackets are designed to reach up and over whatever controls may be in the way. It’s a sort of form we’re not used to seeing in mountain bikes. Structural shapes are supposed to take a straight line from point A to point B to keep things stiff and strong, but nothing about the long arch of the VC Guard brackets feels flimsy. 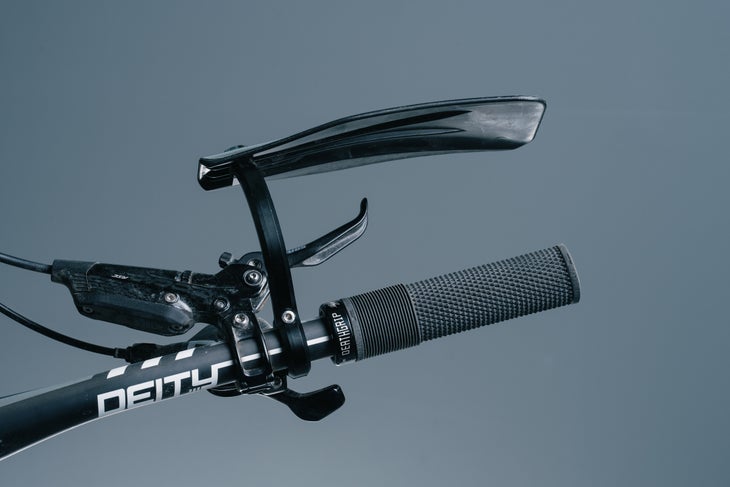 Getting to the guards themselves, they are just as thoughtfully shaped. There is reinforcement in the inner 3/4 that tapers off near the ends to allow them to flex, not break. There is also a separate adjustment if the bracket position alone can’t get them where you want them. During testing, I had the VC Guards on four different bikes, with three different brake lever manufacturers and with both integrated and individually clamped shifters. The only bike I had trouble with, not surprisingly, was my Scott Ransom thanks to my rather bulky above-bar remote shock lockout. There may be some use cases that the VC Guard bracket just can’t accommodate, but you can probably look at your handlebars and guess if you’re one of them.

When talking about how the VC Guards actually function on the trail, there are two things to unpack . One is whether they do their job, and two is whether you even need them. Let’s start with that first one: Yes, they do their job superbly. Once I found the position that adequately covered my knuckles, they were spared those lashings that make my forearms so colorful. Even wearing gloves that feature some knuckle protection, there’s always something unnerving when the flesh and bone that is literally keeping you on your bike are being constantly whipped. It’s the sort of feeling you don’t think much about until it’s gone. But that’s not to say the VC Guards do anything to prevent catastrophe if you hit something immovable. There are other, more structural full-coverage aluminum guards on the market that are designed to protect your pinkys from hard impacts, but you’re no less likely to crash when that happens, and they need to mount outside your bar’s outermost edge, technically increasing the chance that it will happen at all.

The VC Guards’ approach makes more sense to me. They prevent discomfort, not injury. It’s nice that nothing actually changes about riding with this sort of guard. They don’t inhibit movement or require a particular hand position. The only thing I had to get used to was seeing them in my peripheral vision, but that stopped bothering me after my second descent. Eventually, I enjoyed having my hands in their own tiny little isolation chambers. It’s like wearing goggles and a full face. You feel protected from the chaos going on around you. Even with no gloves at all, the skin on my fingers never got a scratch.

But that effect stopped at my wrists. My forearms, elbows, and, for that matter, my ankles and shins were still out there in the suck. I guess I shouldn’t have been surprised that a hand guard wouldn’t protect my legs, but here we are. I then spent a couple days with shin and elbow protection in hopes of completing the effect. And it worked. Without the need for bulky protective gloves, I could charge through the occasional choke point and barely feel a thing.  At that point, the hand-guard concept made more sense … just not for me. Shin and elbow pads have been around forever, but like nearly every other product we choose to suit our riding style, there’s a trade-off when picking protection. I’ll opt for the light weight and simplicity of a couple gloves and a couple knee pads even if it means some discomfort on the descents. Discomfort that, when the adrenaline is pumping, I barely notice at all.

So, even though I don’t find that I need hand guards, there really is no disadvantage to running them, especially ones as well designed as the VC Guards. That’s why I’m so conflicted about this. They did allow me to wear thinner gloves on brushy trails with less pain and less damage to my skin or, for that matter, to the gloves themselves. When I ask myself why anyone wouldn’t run something that offers an advantage with no real disadvantage, it comes back to those Roadmaster Motocykes. I make it a point not to care how any functional feature makes my bike look, as long it makes it work better. I have a remote rear shock lockout, after all. But the VC Hand Guards were a step too far. My eyes were drawn to them whenever I looked at my bike, as were the eyes of everyone who stopped to ask me about them. And I always said the same thing: They work really well.