Greta Weithaler’s face pops up on my computer screen via Facetime at our pre-arranged time in early December, 2020’s equivalent of an “in-person” interview. Weithaler, a former pro XC racer who’s now an ambassador for Ghost Bikes and Bosch, smiles a lot, laughs easily and exudes energy so the exchange is comfortable right off the bat, even though we’ve never met.

We immediately start talking about Weithaler’s first-ever bikepacking trip, which she went on last August when COVID restrictions limited international travel. It was a three-week, east-to-west crossing of her native South Tyrol in the rugged Italian Dolomites, on a marketing trip with another cyclist she didn’t meet until the day they started pedaling.

“We only had one fight, which is great,” Weithaler says. She tells the kinds of stories that any bikepacker can find relatable—sleeping in remote mountain huts, hand-washing her chamois and jersey each night and a wrong turn resulting in an unplanned alpine detour as a terrifying thunderstorm roared overhead.

Weithaler, weighed down by a camera pack, tripod, extra battery and years of emotional baggage from a traumatic racing past, rode an e-MTB while her companion, a ridiculously fit rider (as in, he rode 6,200 miles from South Tyrol to Nepal the year before) pedaled solely under his own power. This is what we’re on the phone to talk about: how e-MTBs brought Weithaler back to cycling after she walked off a World Cup podium, never intending to ride a bike again. A humbling story to humanize a discipline that can sometimes seem to lack a little soul.

A Star is Born

You may not immediately recognize Weithaler’s name if you didn’t follow the XC World Cup circuit around 2013, but back then she was a household name in Italy, if not all of Europe. Weithaler was a super-star XC racer, a promising up-and-comer who stormed onto the junior World Cup scene and quickly landed atop the podium. Her celebrity in Italy was akin to peer Kate Courtney in the U.S.—a budding star on the cusp of becoming a nation’s next big hope for women’s XC dominance. But while Courtney’s career story thus far reads like a fairytale, Weithaler’s unfolded quite differently; she stepped off the World Cup podium during her second year of pro racing after a 5th place finish in Albstadt, Germany, and never came back.

That moment culminated a brief pro career, marked by big wins and a behind-the-scenes battle with depression, an eating disorder and relentless mental anguish as Weithaler, then a teenager, struggled to race at the highest level while balancing high school and a high-pressure home life.

She recalled one particularly low moment after one of her first first-place wins in 2013.

Weithaler started riding bikes at age 9, and racing at 10—very late in Italy, where kids are usually pedaling as toddlers. She grew up in an active family that spent every weekend skiing or hiking in the mountains, but Weithaler and her sister only stumbled upon a mountain biking club while looking for a weekday hobby. They joined and were quickly hooked, but to get the club kit, you had to race.

“We tried it out, and I loved it. I got second on a super heavy bike, racing with my hiking boots,” she said. Weithaler was a natural, and started moving up the ranks, eventually landing on the Italian national team. At first it was fun and casual, but around age 14, Weithaler started feeling like her existence revolved around racing and school, another part of life she both excelled in naturally and pressured herself to succeed. Weithaler was a perfectionist on her own, but her Type A tendencies were exacerbated by a difficult dynamic with her father, who also pushed her to progress her pro career. He had been a Nordic skier who came close to national team glory, and wanted the same for Weithaler, but she didn’t necessarily share the same passion. “My dad’s [computer] desktop background was Rio 2016; mine was a f&cking butterfly.”

“It was a lot of pressure because I think I was living my dad’s dream. We had our years where it was war at home. Every single day, it was something. He organized everything, I had the best bike, he pushed me to get the best coach, he always did everything for me. But maybe you don’t want that when you’re 15 or 16.”

My dad’s [computer] desktop background was Rio 2016; mine was a f&cking butterfly.

Weithaler buried her anxiety and carried on. By 17, she had made Italy’s junior World Cup team. She stormed on the scene in 2013 and won the first two races, placed second at her third and ended her first season with an eighth-place finish at World Championships. That successful season landed her a coveted spot on the Ghost Factory Racing team. From the outside, it looked like a dream come true, but Weithaler was struggling. By the time her second season began, she was fad dieting, propelled by the idea that “skinny” meant fast, and teetering on the brink of both an eating disorder and depression.

She thrived on compliments about the form her body had taken with extreme dieting, and soaked up attention from the media, which had intensified after her banner breakout year. But as she embarked on the race season, Weithaler couldn’t keep up the facade. Traveling with the Ghost team meant it was harder to deprive her body of the fuel it needed without her team manager noticing. She was so weak from dieting that she recalls not having the strength to hold her pen during a test at school.

Somehow, she competed in the first two World Cups of the season in 2014, placing 5th at both, before the wheels finally came off. As she cooled down on the rollers after one of those races, Weithaler collapsed. “I couldn’t do it anymore; I just fell over.”

Her final race was in June, and the following January she quit for good. She resigned from her high-profile spot on the Ghost team, deleted her social media, moved to Germany and didn’t touch a bike for 18 months.

As she cooled down on the rollers after one of those races, Weithaler collapsed. "I couldn’t do it anymore; I just fell over."

“Now looking back, we probably let it go for too long,” says Tom Wickles, Ghost’s team manager. “Knowing what I know now, I would probably act differently. We should’ve taken her away from the bike, and said, ‘You need to stop until you’re back to normal. Whatever the problems are, sort them out, try to get everything sorted, then we can talk about coming back.’”

In the end, Weithaler broke from everything that was breaking her—bikes, competition and her father (the two later reconciled). She started going to therapy and studied biology at university, living a “normal life.”

But she still felt lost. Weithaler truly loved the sport—bikes had given her some of the best times of her life—but couldn’t ride without crying. “Those were the hardest years of my life. The only thing that made me happy, I took away.” After about 18 months, Weithaler started going to a few events with her boyfriend at the time, who was wrenching on bikes. She started seeing people from her past life, and one day went on a ride with a friend who loaned her an electric mountain bike. And just like that, she was recharged. 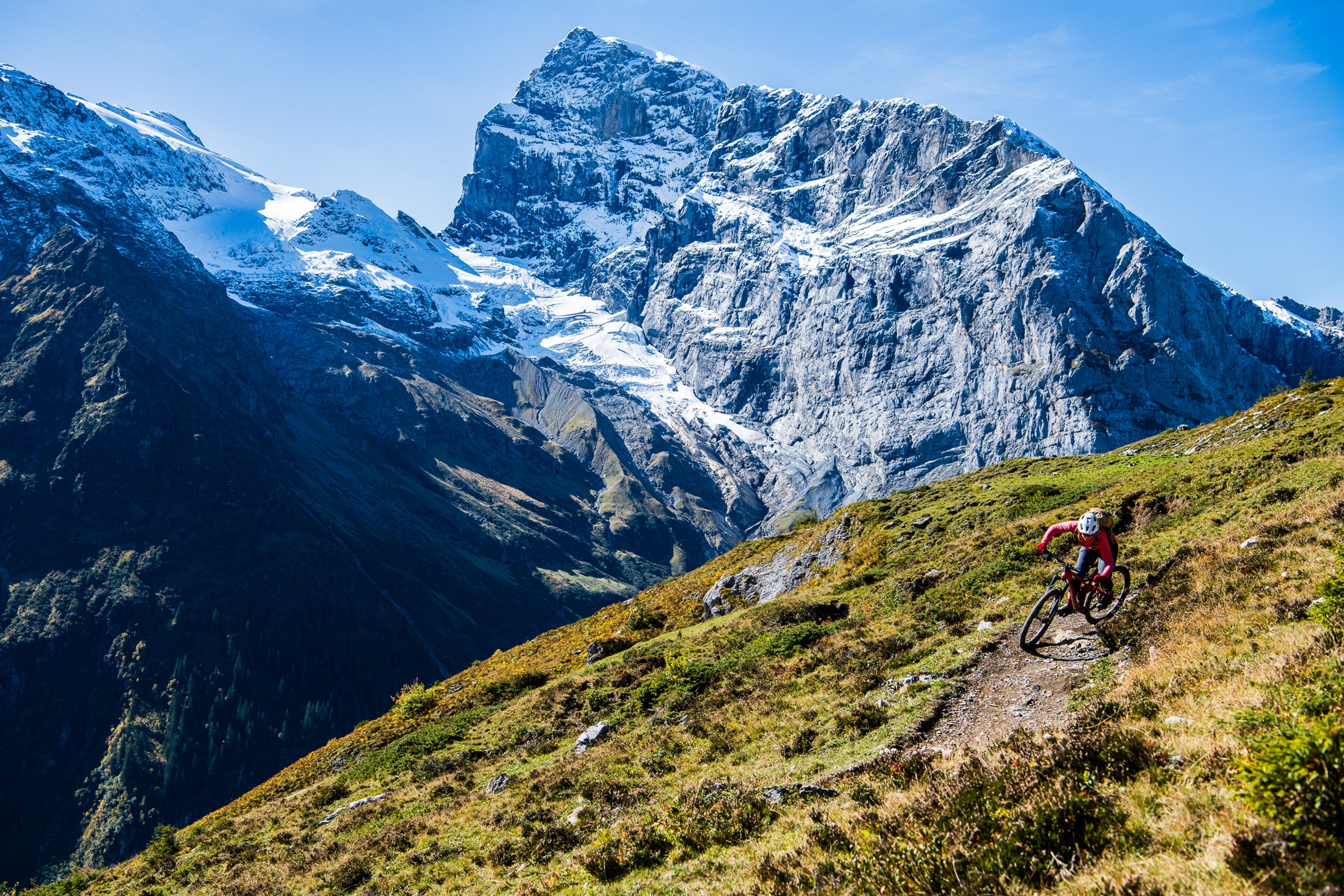 “I was happy again for the first time in a year. That day I was like, ‘Oh my god, I just smiled without forcing it.’”

It wasn’t the fitness boost that Weithaler needed; it was the mental one.

“It takes away the pressure,” Weithaler said. “It brings you up the mountain without any pressure about feeling fast. I could bike without comparing myself to the girl I was a year ago racing World Cups and being fit. It was just so much fun.”

I was happy again for the first time in a year. That day I was like, ‘Oh my god, I just smiled without forcing it.'

Not long after that, Bosch, then investing in its eBike Systems technology, asked her to be its first female ambassador, but her full-circle moment didn’t come until she re-signed with Ghost, and Wickles, two years later.

“We never totally lost sight of each other,” Wickles said. “It’s so cool to work with her again.” 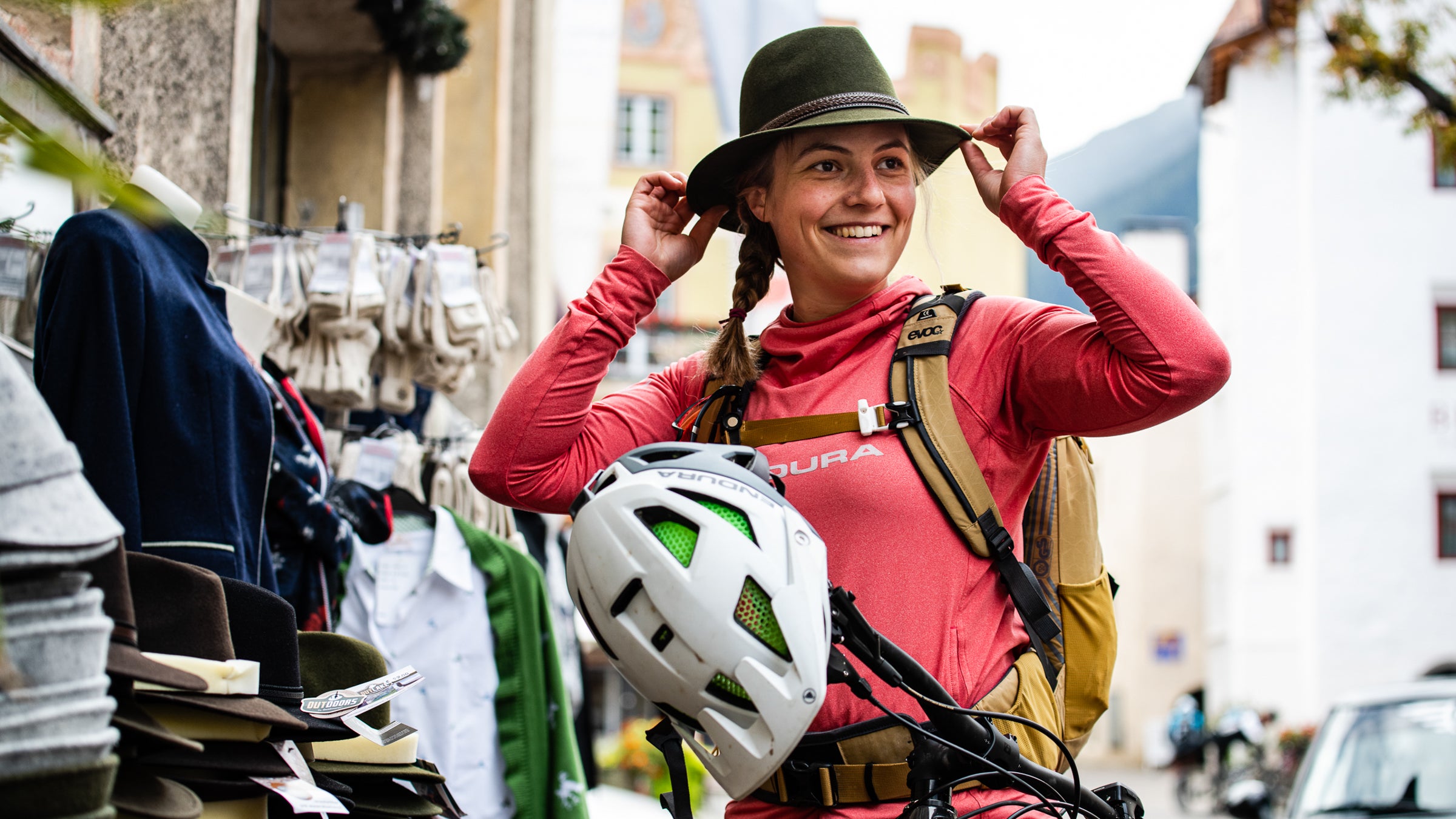 Weithaler runs social media for the same team she left abruptly, working with the same mechanics and marketing folks as she did when she raced, and is also an ambassador, attending events and riding in Ghost photo shoots to promote e-bikes. She rides analog bikes too—and quite well—but gets most excited when she talks about the possibilities around e-bikes and the prospect of self-supported adventures without needing to plug-in after a big day. “I’m really searching for a way to be self-sufficient on an e-bike. That is still the biggest disadvantage. You’re free 99 percent of the time, but on those long, remote, self-sufficient rides, you’re kind of limited. I’m still searching for something that takes that away, like foldable solar panels. I’m on my mission to find it.”

But mostly she’s grateful for what she’s already found, thanks to the battery-powered machines: health, happiness and a reinvigorated love of bikes.