-Not the cross-category shredder that similar bikes are today

This could have gone one of two ways. Fezzari could have made the new Signal Peak into a dyed-in-the-wool short-travel shredder like the Transition Spur or like … any of the other bikes we usually list after mentioning the Transition Spur. Or they could have simply made it into a better version of what it always was: an XC-leaning trail bike that’s made for XC-leaning trails. Turns out, Fezzari went for the latter. In fact, there’s now also an even more XC-leaning Signal Peak in the lineup. Unlike the Signal Peak TR that I rode, with its 115mm rear travel, 120mm front, the plain ol’ Signal Peak sits on just 100mm front and rear. And apparently, it needed no extra initials after its name to tell you what it was meant for. It’s as if that shorter-travel, race-focused configuration were Fezzari’s purest take on the new Signal Peak platform. And I can confirm, that’s exactly what I sensed during my short time with the Signal Peak. But because it’s New Bike Release Day, let’s cover exactly what’s New before I get all emotional about what I felt.

First, it’s lighter. The claimed 1860g “average” frame weight on the new Signal Peak rivals that of some legacy XC race frames, and is about 1.5 pounds lighter than the previous Signal Peak’s frame. It also proves, just in case you haven’t followed the leaps the brand has taken in recent years, that Fezzari is the real deal. They may not have the sleek brand image of other consumer-direct names like Canyon or YT, but Fezzari is making bikes that push the envelope in design and function. Take the just-released Kings Peak fatbike, which actually has capable, modern geometry while major brands like Trek let their fatbikes languish in obsolescence. Or more impressively, the La Sal Peak, which over three years ago, had a 78-degree seat tube angle. It shouldn’t be a surprise that Fezzari was able to successfully refine their carbon layup enough to make frame weight a talking point.

The new Signal Peak also has an actual seat tube angle that’s very close to its effective seat tube angle, a nerdy example of attention to detail all too rare in modern full-suspension frame design. The effective angle is two degrees steeper than the previous Signal Peak, and the head angle is a degree slacker. And, remarkably, reach measurements are not 20mm longer. In fact, the reach has barely changed at all, but we’ll cover that later. A few other updates were made like lower standover, deeper seatpost insertion, more supportive suspension kinematics, and a move to metric shock sizing (remember when that was a big talking point?). Although the introduction of the 100mm Signal Peak may represent a seismic shift in the model’s identity, the Signal Peak TR I tested is simply a refinement of its predecessor.

And although I admit that I personally would rather have seen the Signal Peak enter the aforementioned Transition-Spur-and-friends category, it’s not necessarily the right category for every rider or for every trail. In fact, given that the Signal Peak now has that shorter-travel option, it was probably safer that Fezzari … played it safe. Riding the Signal Peak TR, I never had the sense that it was daring me to go beyond what bikes of its travel were once limited to. It didn’t feel like its wheelbase and cockpit were meant for one thing while its frame and suspension were meant for another.

My one day with the Signal Peak was spent in Sedona, Arizona, which may be the first place a mountain biker ever used the word “ledgy” to describe a climb. Many of the loops in Sedona feature unrelentingly technical uphills. It’s a torture test for suspension efficiency. You are constantly alternating between hammering up shaley steps, meandering through on-trail obstacles, and letting loose on the occasional mid-climb rocky descent. It’s the sort of thing the Signal Peak TR was made for. The short wheelbase allows quick decisions to have quick results. I remember multiple occasions where, winding around a sharp drainage that crossed a traverse, I expected to understeer and run my front wheel up the trail’s highside. But I could keep both wheels on the trail without needing to reach into my bag of trials skills. It made it easier to keep my momentum and just focus on picking lines and pedaling my heart out.

And up in the cockpit, it didn’t feel unfamiliar. This XL test bike has a reach of 483mm. My personal XL bike is 508mm. But the Signal Peak’s moderate 75-degree seat angle meant that, even for those of us who are used to long bikes, it shouldn’t feel cramped. Now, I’d normally turn my nose up at a 75-degree seat angle, but like every other geo number, you have to consider the rest of the bike that surrounds it. Most notably, the suspension. At 115mm of rear travel, the Signal Peak TR seems to be making a statement that it’s just barely a trail bike. And the way it carries that travel backs that up. This is a bike that’s meant for hammering up those ledgy climbs. It’s not just efficient to pedal the Signal Peak TR, it’s exhilarating. That’s partly related to the newly enlightened chassis, but I paid more attention to how the suspension behaves. The bike’s XC DNA was front and center every time I went to put the power down. 120mm shredders like the Santa Cruz Tallboy or Evil Following do a great job for how uncharacteristically downhill-focused they are, but neither say “race” when you try to attack a section. The Signal Peak TR, on the other hand, screams it. Combining that rewarding efficiency with the no-fuss handling, it felt like this bike was made to cover ground, and cover it quickly and easily. The word “marathon” comes to mind, a word that’s been replaced recently with … another word. 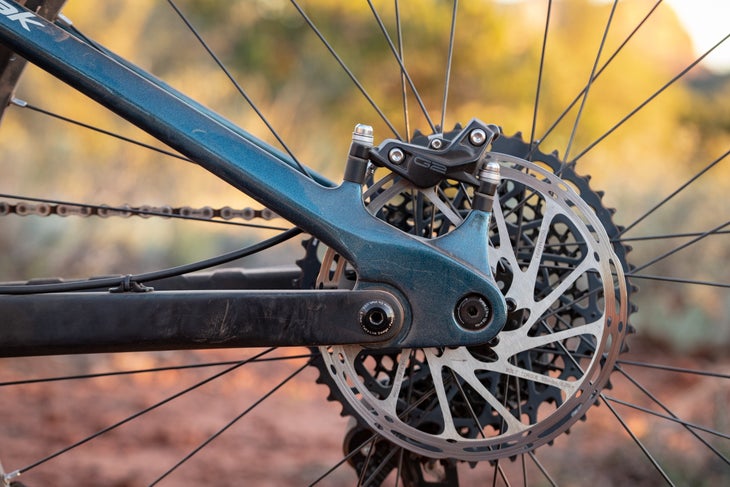 “Downcountry” did not come to mind when riding the Signal Peak TR. I certainly did my fair share of down, and the bike handled it, but it’s clear that wasn’t Fezzari’s main focus. For riders primarily looking to make the most out of every downhill, but also looking for a short-travel experience, there are bikes better suited for that combination. The descents I tackled on the Signal Peak TR were nearly as technical as the climbs, and I had to stay on my toes to navigate them at speed. Not just because of the bike’s relatively short footprint, but because there’s no magical extra few millimeters of travel hiding in the frame. It offers admirable small-bump sensitivity and bottom-out resistance, but doesn’t feel like it has any more than 115mm back there. And here’s where I have to zoom out from my southern-California-focused experience with mountain biking. Not every trail network is made up of long ups and long downs. Sedona, in fact, was a slightly chunked-up version of the ideal environment for the Signal Peak TR. I think to the rolling hills of northern Vermont, or the undulating loops in southern Illinois. Places where you provide the speed, not gravity. Places that were betrayed by the lengthening and slackening of trail bikes. This is where something like the Signal Peak TR will truly shine. Too few bikes feature the modern touches of the Signal Peak TR without being marketed to recovering enduro racers. This is a bike for the rest of us.

And being Fezzari, it’s priced for the rest of us as well. You can get into a full-carbon Signal Peak for $3,800. And that includes Fezzari’s impressive customization options and honest-to-goodness 30-day return policy. I can’t list a price for the bike I tested because the ever-present supply-chain issues meant that it was not built to-spec (there’s definitely not a remote lockout on the Signal Peak TR) but I can say for sure it rode better than the $10,000 Scott Spark we recently tested, and is probably about half the price. 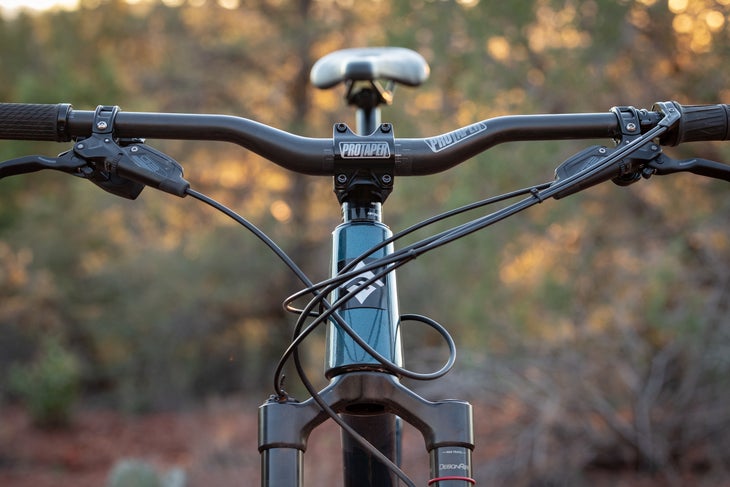 It would be missing the point to call the Signal Peak TR “conservative.” That’s often used as double-speak for “outdated.” I think Fezzari knew exactly what they were doing with the new Signal Peak. Again, Fezzari is not afraid to push the envelope. But not every bike should push the envelope in the same way. The Signal Peak TR combines modern approaches to carbon, design and suspension with a measured, deliberate approach to geometry. It’s not jumping on a bandwagon. It’s too busy out there doing laps.