We’re going to do things a little differently right now. If you’re reading this, think of it as a supplement to the roundtable video review of the Santa Cruz Bronson, not a stylized transcript of it. The video really covers most of what we have to say about our experience. In fact, it covers it pretty well, if we may toot our own horn. It ended up being a pretty lively discussion. 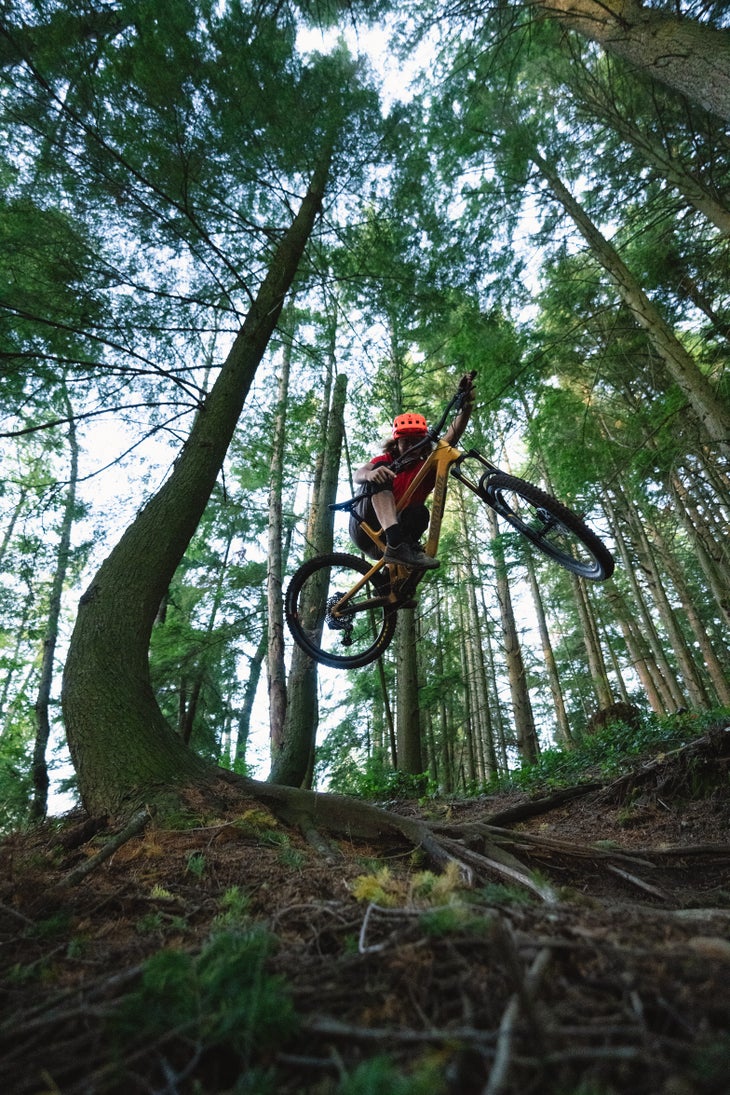 But the thing is, we didn’t cover so much about the bike itself. This, after all, is a Santa Cruz, and few brands focus this much on a bike’s fit, finish and function. Case in point; we’re well over four years into the brand’s transition to lower-link VPP, and it has proven to have been quite the trendsetter. The first time we saw it on the previous generation Nomad was, for many of us, also the first time we heard the phrase “straight progressive leverage curve.”

Like nearly all of Santa Cruz’s bikes, the Bronson was designed to be consistently supportive through a broad range of its travel. It’s why we were happy doing our entire, rather chunky climb with the rear shock wide open. That’s remarkable considering we went on about the 120mm Scott Spark requiring a lockout. It made the Bronson an excellent platform for a mixed-wheel setup, because that 27.5-inch rear wheel needed all the help it could get rolling over the countless roots on our 1,000-foot climb. The new VPP has done a better job than it ever has at matching efficiency with traction, but still leans more towards the former and less towards the latter.

We rode in the flip-chip’s low setting, and it’s the sort of “low” that is probably going to be the go-to for most Bronson users. That gets you a middle-of-the-road 76.5-degree seat tube angle, but one steep-angle-addicted tester was more than happy after slamming the saddle forward. Moving the bike around with a 64.5-degree head angle and 1249mm wheelbase (size large) made for a ride that wasn’t the flickability-first sort of ride that some folks might want out of a mixed-wheel platform, but this is a 150 rear / 160 front travel setup that rides like it’s focused on capability more than it is on goofing off. That’s also evidenced by its size-specific chainstays that are stretch to 442mm in the XL. Not a barge, but hardly an effort to be a manual machine. Really, the biggest standout is the relatively high stack height. Paired with the small rear wheel, the Bronson is the perfect machine for steep descents. One particular rock roll on our test course was the most fun to session on the Bronson of any other bike in the fleet.

It all points to the fact that this bike, unlike so many others, was not hacked into working as a mixed-wheel. It was made for it. Nothing feels forced or unnatural. It’s a full package. But then again, we cover that all in the video.

In the past, Santa Cruz has offered aluminum-frame versions of its most popular models, and while that may come with the Bronson, it’s not here yet. The least-expensive carbon frame build, the ‘R,’ runs $5,050, and comes with a Carbon C frame (slightly heavier than Carbon CC), Fox Float X Performance shock, RockShox Lyrik Select fork, SRAM NX 12-speed drivetrain and RaceFace ARC Offset 30 rims—the same as on every other build until the X01 AXS model. The dropper post on this model is downspecced from the Reverbs seen throughout the rest of the models to an SDG Tellis. The extra $900 for the ‘S’ model might just be the sweet spot, though, if you can swing it. That money gets you the same frame with a Fox Performance fork, RockShox Super Deluxe Select+ shock, a full SRAM GX drivetrain, a hub upgrade to DT Swiss 370 and that Reverb dropper—enough upgrades to shave more than a half-pound off the bike’s weight.