When the Process 134 was released in the summer of 2019, I wrote about how it seemed incredibly well thought out, not rushed to market, and that I thought it’d have real staying power and lasting relevance. A full two years later, the 134 is the ‘oldest’ model in this crop of Beta Tests bikes, but in no way does it feel outdated.

This version of the 134 was Kona’s first ever full-carbon Process bike, featuring carbon seatstays, chainstays, link, and of course main frame. From a distance the 134 boasts nice clean lines, and its elegant silhouette only gets better as you move in for a closer look. The cable routing is tidy, with nicely molded entry and exit ports and tube-in-tube construction throughout. Throw the cable in one end and it pops out the other, just as all modern internal routing should be. But Kona went a step further by adding a rear brake entry port on both sides of the head tube to optimize routing for moto brake routing as well. The ports join at a Y-junction inside the frame, so you can just feed the cable in whichever side you need and it’ll pop right out the same exit port at the downtime/bottom bracket junction.

Kona also lowered the chain stay yoke for more chain clearance and and a quieter ride, steepened the actual seat tube angle for better consistency throughout the saddle height range, and increased maximum post insertion, allowing even short riders to run long droppers. We know a woman who’s 5’3″ and runs a 170mm dropper in her size small Process 134. Everything from the overall industrial design down to the small details found in the integrated chainstay, seatstay, and downtube protection shows a boutique-brand level of attention.

And the Process 134 geometry and suspension feel are just as considered. The 130mm rear, 140mm front travel 29er was designed to have very middle of the road handling characteristics—not too twitchy and snappy, but not to plowy and pillowy. The bike has some fairly neutral numbers, like the 66-degree head angle, 76-degree seat angle, and 475mm reach (size large), while offering progressively low standover and corner-slashingly short 427mm chainstays.

Meanwhile, the bike’s leverage curve is more progressive, with improved anti-squat characteristics as well. All models come spec’d with shocks that include some volume spacers, but room for more, so riders can choose to take some out for a more linear stroke or add more extra pop and support—another detail that Kona made certain to consider. Out of the box, the Process 134 has a lively, energetic feel under power, and it’s by far the most pedal-efficient Process Kona has ever made.

Our test loops almost always begin with a climb, so our very first impressions are usually related to a bike’s climbing prowess. We expected a middle of the road climber might feel efficient to riders coming off bigger bikes, but what we experienced was an eagerness for climbs that we haven’t felt from any Process bike before. Like many smaller-travel bikes, the 134 rewards you for putting power into it and begs for more, which is something we should have expected considering that Kona likes to think of this bike not so much a new Process 134, but an updated Process 111.

That’s in fact, how the project started. The Process 111 had become a cult classic because it blended XC and Trail attributes in a way that produced more LOLs per mile than most bikes could, but it was time for an update. Kona has a reputation of not limiting a project by defining the travel number from the outset. Rather, they like to just go ahead a make a bike match the ride characteristics they’re after, and sort of let the travel number fall where it feels the best. That’s part of why, back in 2013 when the first Process bikes were introduced, they were named for the actual travel numbers that they wound up with. The 111 was not a 110mm bike, the 153 was not 155mm. It was a way of showing that design and intent were more important than hitting an exact, arbitrary travel number.

Kona was going for the feeling that the 111 provided. The ability to inspire anaerobic efforts not just up to the top, but back to the bottom as well, is what they were after. Something that could produce the same LOLs per mile as the 111, while increasing overall capability and versatility. It just so happens that they achieved it by adding precisely 23 millimeters (or whatever it wound up being) of rear wheel travel.

Our testers all agreed that the 134 is a joy to climb. It pedals in a way that’s efficient and predictable, it navigates steep technical switchbacks with ease, and while it it isn’t a magic carpet machine like some more sophisticated multi-link suspension bikes are, it’s not mushy at all. There’s plenty of support to push into, whether it’s punching up a steep climb, pushing into a berm, or smashing over a rock garden. The 134 prefers to play around and find bonus lines over clinging to the ground, but what it gives up in overall maximum grip, it makes up for in liveliness.

The mix of agility, efficiency, and trustworthy descending make the Process 134 a perfect do-everything steed that feels at home on a wide range of terrain. It really does feel more like a long-legged 111 than a mini 153, despite taking significant design cues from its bigger sibling. Though, that’s not to say it doesn’t haul-ass on the descents. It’s just slightly more concerned at doing everything equally well, whereas the 153 is designed specifically for downhill capability.

The 66-degree head angle, 51mm offset fork, 475mm reach and 427mm stays all make for really neutral, easy-going handling that provides enough stability and security to charge hard down steep and rowdy terrain, as long as you’ve got the skills to keep up. The chassis is stiff enough to stay under you when things get hectic, while not being unforgivably rigid, and the overall balance is so centered and comfortable that all three testers, across two sizes felt at home on the bike right away.

Value is a bit of a tricky topic with this bike. We rode the CR DL version, which comes spec’d with top level RockShox Pike and Super Deluxe Ultimate fork and shock, Reverb dropper, SRAM X0 drivetrain bits, and DT 350 hubs on WTB KOM Light i30 hoops for $6,200. There aren’t any flaws in the spec, but there other bikes in this price range that offer things like carbon hoops and bars for the price. Recognizing that, Kona has a proven track record for making tough, reliable, easily serviceable bikes, and this is no exception while being perhaps the most elegant and full-featured frame they’ve produced to date—and that’s worth a lot.

The $2,500 base-model Process 134 is proof that, although expensive bikes keep getting more expensive, the reasonably priced ones can often offer just as good a value as they did a decade ago. $2,500 has long been the price point that your mountain bike buddies would insist you not go below if you want a bike that will check all the boxes. And although this version isn’t meant to hold up to all-out shredding, it succeeds at checking all the boxes. This model runs on 11-speed deore, not the cutting-edge 12-speed, but its 11-50 gear range is on par with that of SRAM NX, and it offers the more refined shifting we’ve come to expect from Shimano. The brakes are about as entry-level as it gets from Shimano, but the levers have modern ergonomics, and the calipers are compatible with the pads used on some of Shimano’s higher-end brakes, meaning you could upgrade the pads and rotors from the stock organic-only setup to a more powerful metallic compound. The fork uses a simple, not widely adjustable damper and is built with relatively thin 32mm stanchions, so it may not feel responsive enough under the sort of riding the Process 134 is capable of. Bottom line, if you’re out to tackle some moderately chunky terrain, this bike will take you there for an excellent price. On the other hand, if you want a trail bike that can take you into enduro territory, the $3,900 Process 134 DL has the fork and brakes that will stand up to it. But once you’re at that price point, the competition gets pretty stiff. On paper, bikes including the Giant Reign 29 and Ibis Ripmo AF both offer more for the money. 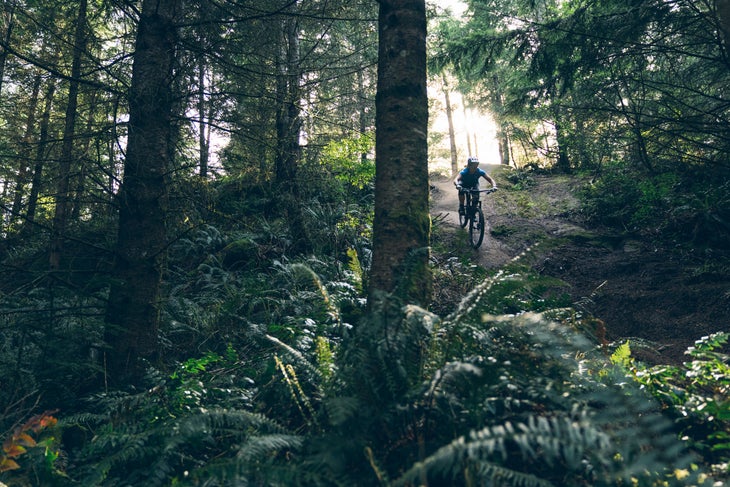 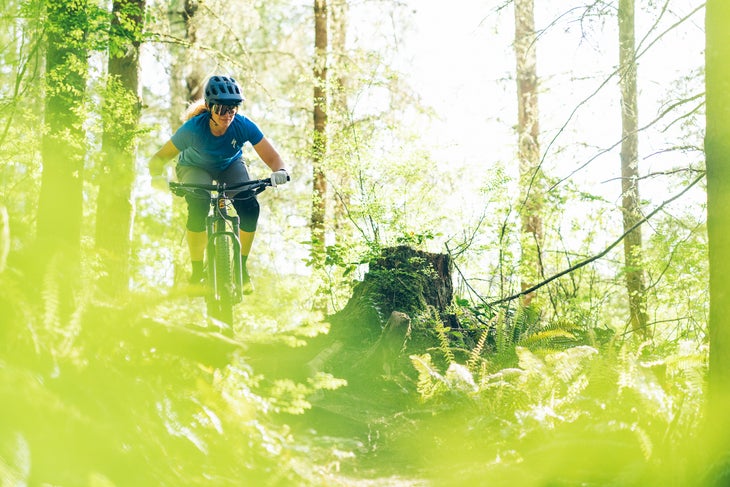 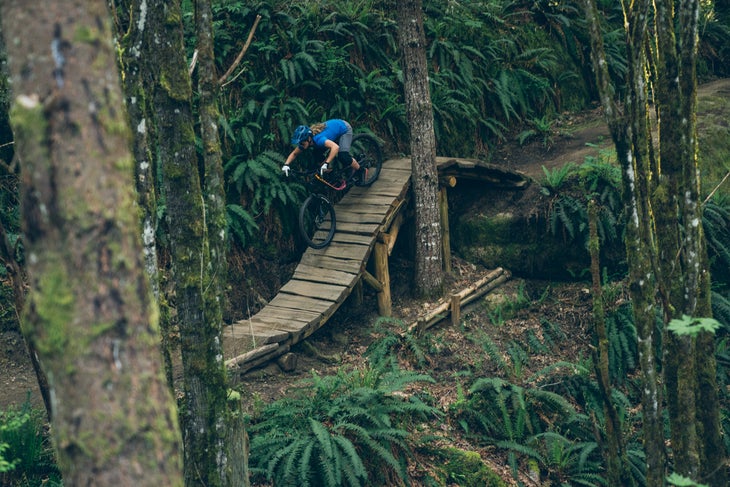 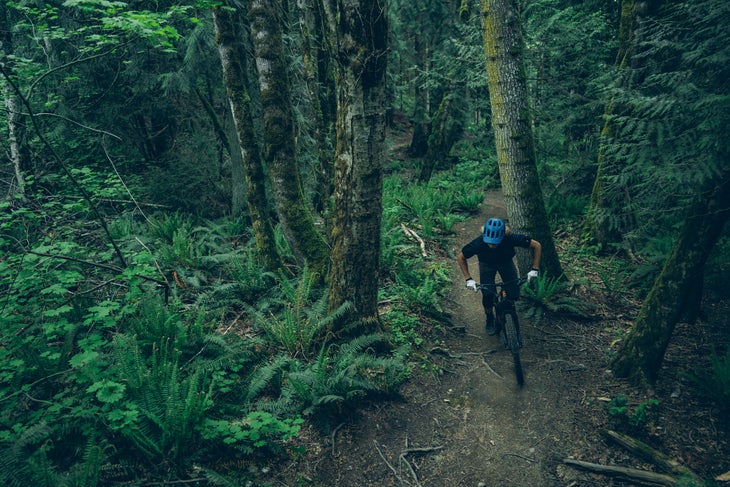