The Roubion has long been firmly planted as Juliana’s all-mountain weapon—long-travel, small-wheels, a charger on the descents and predictably well-behaved everywhere else. But with the 27.5-wheeled, 130mm-travel Furtado also in the mix and the 145mm-travel Maverick checking the mid-travel 29er box, plus a general trend toward long-travel 29ers, the Roubion was starting to feel dangerously close to falling into category purgatory. 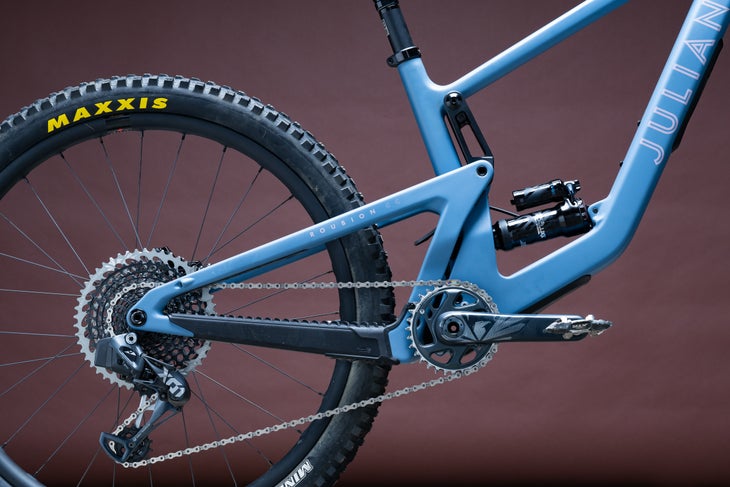 But not anymore. Juliana gave the Roubion the mixed-wheel treatment this year, and it injected just the life this bike needed. With a small wheel in the back and a 29-inch wheel up front, the Roubion—also known as the Santa Cruz Bronson with different touchpoints, a lighter shock tune and a cooler paint job—maintains the liveliness of a small-wheeled bike but gains the traction, speed and clearance inherent to 29ers.

Testers unanimously appreciated the bike’s acceleration, and how quickly it gains speed, particularly when exiting corners, when you could rally out of the turn and not worry about losing the front of the bike. That characteristic points to the bike’s geometry, which incorporates size-specific chainstays. The size medium, which is the largest frame size available in the Roubion, measures 436mm (in the low geometry setting), while the small is 432mm (as is the XS, which is a matched 27.5-inch-wheeled bike).  It’s a long bike—the wheelbase is 1,222mm with a 604mm reach—but that 27.5 wheel in the rear gives it a playful personality, while a 64.5-degree head angle is slack enough to maintains its rowdy demeanor on steep descents (but no tire bum-buzz—bonus!).

And while 27.5 wheels tend to hang up a bit more than 29-inch wheels on the climbs, the refined VPP suspension instead feels active and efficient. Juliana nailed the execution of the Roubion—purposely building it as a mixed-wheel bike instead of slapping a different link on a 29er.

If you’re aiming for pure speed, a matched 29er might net you faster lap times, especially on tracks with wide-open descents; but a mixed-wheel like the Roubion will almost surely net you more fun. And that’s a compromise worth making.

In the past, Santa Cruz/Juliana has offered aluminum-frame versions of its most popular models, and while that may come with the Roubion, it’s not here yet. The least-expensive carbon frame build, the ‘R,’ runs $5,050, and comes with a Carbon C frame (slightly heavier than Carbon CC), Fox Float X Performance shock, RockShox Lyrik Select fork, SRAM NX 12-speed drivetrain and RaceFace ARC Offset 30 rims—the same as on every other build until the X01 AXS model. The dropper post on this model is downspecc’d from the Reverbs seen throughout the rest of the models to an SDG Tellis. The extra $900 for the ‘S’ model might just be the sweet spot, though, if you can swing it. That money gets you the same frame with a Fox Performance fork, RockShox Super Deluxe Select+ shock, a full SRAM GX drivetrain, a hub upgrade to DT Swiss 370 and that Reverb dropper—enough upgrades to shave more than a half-pound off the bike’s weight.