-Amazing value
-Modern, aggressive geometry
-High-end spec where it counts and not where it doesn’t
-Comfortable climbing geometry

We always run into a dilemma when reviewing bikes from brands known for their value. It’s hard to avoid giving them a pass for cut corners or poor finish. Plus, focusing too much on that value by, say, building our intro paragraph around it, might instill a bias in the reader by labeling the brand as “budget.” But bikes like the Marin Alpine Trail Carbon are such a good value that it’s hard to avoid.

At $4,100 (not $4,000 as we were told during testing), there are few bikes that would have an SLX/XT drivetrain, SLX brakes or a DPX2 rear shock. And there are no bikes that would have a Grip2-damped Fox 38 fork. Really, the only real shortcomings were the slightly sluggish TransX dropper post and the rattly cable routing. But the dropper post does the job, and the cables can be wrapped in foam.

The spec was the other aspect of the Alpine Trail Carbon that we tried not to get distracted by. That Fox 38 fork, on a 160-millimeter-travel 29er, felt like overkill. Maybe we’re still getting used to the slightly stiffer, slightly heavier new player taking the reins once you get past 150mm, but it seemed like overkill for what feels like a relatively mild-mannered bike. Same with the Double Down casing on the Maxxis Assegai rear tire. 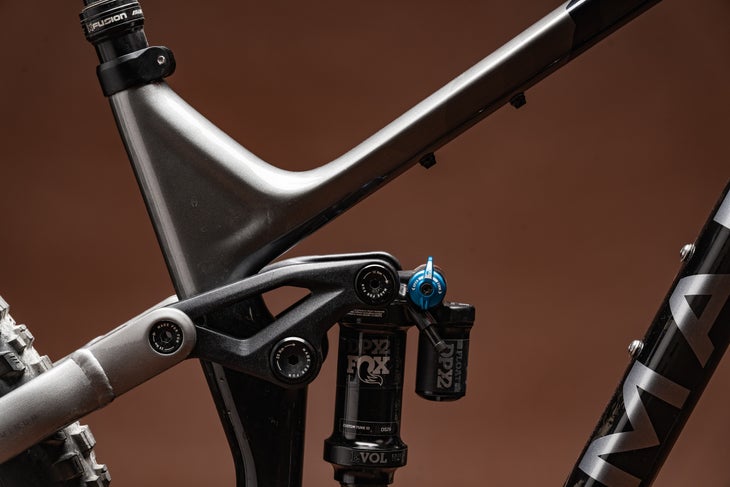 But the fact that we called it “mild-mannered” may be chalked up to how most of us approach long-travel 29ers. We’re used to them being sleds, barges, or some other large vehicle meant for going in straight lines while sliding indifferently over whatever surface they’re on. The Alpine Trail Carbon is not that sort of long-travel 29er.

Yes, it has a 63.5-degree head angle and 1,252mm wheelbase (size large), so the chassis itself is comfortable and forgiving, but as the testers each dug into what that chassis wanted to do, it was surprisingly easy to control. For a bike that’s not particularly light, it has a particularly light touch. It welcomes being pushed into compressions or stabbed into corners in the way today’s new breed of much shorter-travel 29ers do, but with the big bones of an enduro bike.

What results is a bike that is never numbing or boring, even if it happens to be in terrain that is far beneath the intent and capability of a bike with these numbers and this spec. That’s thanks, in part, to the moderate 150mm rear travel, but also that it’s being held up by a Fox DPX2 shock, which has a more rampy, supportive feel than the Fox Float X2 we might have expected to see on a bike like this.

That combination also will serve the true thrashers. The riders who need a burly package because they like to take charge while they charge. There’s a combination of stiffness and playfulness that few bikes out there offer.

And that supportive platform makes for a pretty practical daily driver. The straightforward four-bar suspension isn’t groundbreaking, so we didn’t come away with any real memorable moments on the climb. But that’s sorta the point. It’s unremarkable in a good way. It’s not the otherworldly hoverbike that the DW-Link-equipped Ibis Ripmo is, or the hammerhead’s dream that is the Switch Infinity-based Yeti SB150. It’ll climb and it won’t fight you. That’s also helped immensely by the 78-degree effective seat tube angle. During short grunts while you’re out of the saddle, it stayed active enough not to be distracting, but for the long slogs to the big descents this bike was made for, you just pedal and pedal and suddenly you’re at the top.

There’s something refreshingly classic about how Marin approached the Alpine Trail Carbon. The choices in travel, spec and geometry might, from a distance, seem a little all over the place, but what results is a bike that can go all over the place. A bike that feels as natural on mellow local lunch loops as it does on big endless descents. The sum of its parts is a versatile machine that has something for most of us ‘normal’ riders, but with just enough extra for the superhuman shredders.

See? We didn’t even need to wrap it up with a reminder about how incredible the value is.

So, if you’re not looking to spend anywhere near $4k, there’s also the aluminum-frame Marin Alpine Trail 7. For $2,570, you get the same travel and geometry as the Alpine Trail Carbon. The rear shock drops to a RockShox Deluxe Select +, which doesn’t offer the big-hit support or fine-tunable compression damping as the Fox Float DPX2 on the Alpine Trail Carbon, but you can always add volume spacers if you need it to be more punchy. It also kept the lockout lever that could have easily been skipped to hit a price point. A nice feature on any long-travel bike. The RockShox Yari fork doesn’t have the complex supportive damper that the Alpine Trail Carbon’s Fox 38 has, but it’s plenty reliable, the damper can be upgraded without swapping the fork, and honestly, we think the Yari chassis suits this bike fine, maybe even better than the Fox 38

The Shimano MT420 4-piston brakes show Marin doesn’t want you to have to hold back on the descents just because you aren’t made of money. In many ways, it’s hard to differentiate the feel and function of the MT 420s from Shimano’s flagship brakes, even down to the updated stiffer clamping system. The Deore drivetrain isn’t as crisp-feeling under either foot or thumb, but it is plenty reliable and offers the same range as Shimano’s top-end drivetrains. There aren’t any real deal-breakers on this build, though you may want to upgrade to metallic brake pads.