-One of the Best Riding All-Round Trail Bikes Available

Evil Bikes released the original Offering 29er at the tail end of 2018, quite some time after its first and second big-wheeled bikes, the Following and Wreckoning, splashed onto the scene. It received high marks form nearly all who tested it, and was supremely loved by those who purchased the Goldilocks model. The Offering served up something that neither of the others could: ultimate trail bike versatility. Taking up that coveted top space on the bell curve, The Offering shined in places where The Following’s 120 millimeters of travel and capability dropped off, and was still quick and poppy on terrain that bored the pants off the then 160mm-travel Wreckoning and those riding it.

This is the second time the Offering has been third in line, with updated versions of both The Following and Wreckoning having been released earlier in 2020. Once again, the Offering finds itself splitting the difference between the two other 29ers in Evil’s range, but this time, it’s taking up an even wider space on the bell curve. The second generation Offering is even more versatile and capable than its predecessor. It’s still sporting the same 140 millimeters of fun, supportive and endless-feeling D.E.L.T.A suspension, but rather than being designed around 140mm of fork travel (with the capacity for 150mm), the new Offering is made for 150mm, and optionally, 160mm-travel front ends.

But, holding true to a move that our crew has applauded Evil for during its most current phase of frame redesigns, they didn’t go all-out-nuts endurofying the Offering. Riders coming off version one, will notice a significantly roomier cockpit, and far steeper seat angle, and a head angle that’s essentially the same—just two tenths of a degree slacker. The fork offset has been reduced since the previous version, so in back-to-back testing, riders would theoretically experience slightly slower steering with a higher degree of stability at speed. 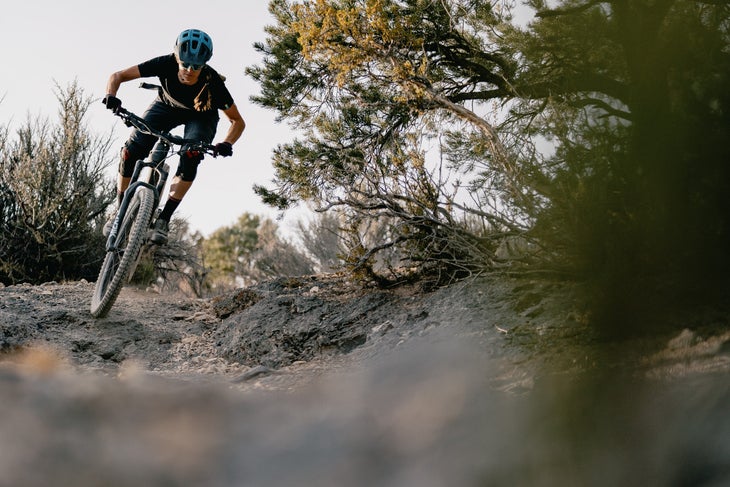 Our Beta Tests crew wasn’t able to do that, but all agreed that the bike felt easy to handle and offered plenty of stability at all speeds. Mike Ferrentino notes in the video review of the bike that he found it more stable and planted than poppy, though I’ve spent quite a bit of time on the bike and I’d throw my hat in the ring to say that, while it does’t leap off the ground quite like its little brother The Following, it’s one of the more agile bikes in this travel range in the pop department. It’s easier to get airborne than the Ibis Ripmo, though all testers favor the climbing prowess of the Ibis. With the shocks left open, as both of these Dave Weagle-designed suspension platforms are meant to be climbed in, the Ripmo stays slightly calmer, while the Evil digs in with slightly better traction on technical climbs and has more noticeable bob during smooth uphill efforts, an attribute that Lydia Tanner, the most XC among the testers, didn’t quite vibe with.

The Offering has the edge on versatility, though. The lower headset cup is a large 62mm to accomodate optional 1- or 1.5-degree angle headsets, giving steep-and-deep riders a max-slack 63.8-degree head angle when paired the 1.5 degree angle headset, longer 160mm fork option and the flip chips in the ‘X-Low’ position. In the higher ‘Low’ setting and the 150mm fork we had during testing, the Offering sits at a reasonable 66.4, a full degree and a half steeper than the Ripmo’s fixed 64.9 degrees.

And of course, Evil advertises and sells the Offering with the option of choosing fork travel, while, again the Ripmo is only offered with 160mm up front. What all this dense information boils down to, is that the Offering can be suited to be more at home on less radical terrain than the Ripmo, and potentially more as well, though to be clear, time didn’t permit us to test the bike with a longer fork or either of the optional two angle headsets.

The Offering was popular among the crew that, though not every tester (or film crew member) was required to ride it, but each and everyone did. The consensus lands the Offering securely among the top 5 bikes we’d recommend, and it can be suited to a wide array of terrain and rider types.

Like all of Evil’s mountain bikes, the Offering is only made in carbon, with the frame and Rock Shox Super Deluxe Ultimate RC shock priced at $3,300. The Sram GX build, Evil’s most affordable complete bike package, goes for $5,800. The build comes with a solid top-level Rock Shox suspension, including a Lyrik Ultimate RC2 fork and aforementioned shock, as well as very nice Industry Nine Enduro S wheels with the company’s nicest Hydra hubs. The brakes on the GX build get downgraded from the stronger Sram Code RSC on the X01 option to Sram G2 RS. They’re good brakes, but don’t have quite the same power of the Codes. And, if you watched the video review, you might recall that we even had trouble with brake fade on the Codes. To be fair, though, the relentless descent on our Ely, Nevada test course torched most brakes in the test, though the Shimano XT 4-pots held up the best.

To continue the Ibis comparison, you can get onto a Ripmo with Shimano Deore 12-speed and DVO suspension for $4,400. We’d like to see Evil’s entry price come down a bit, and we’d certainly welcome an option to buy completes with the stunningly good Shimano Deore groupset. 2021 could shape up to be anther difficult buying season availability-wise, so keep your eyes peeled at Evil-Bikes.com if you’re keen on an Offering, or call the company’s Bellingham, WA headquarters at 877.696.EVIL for ETA updates.